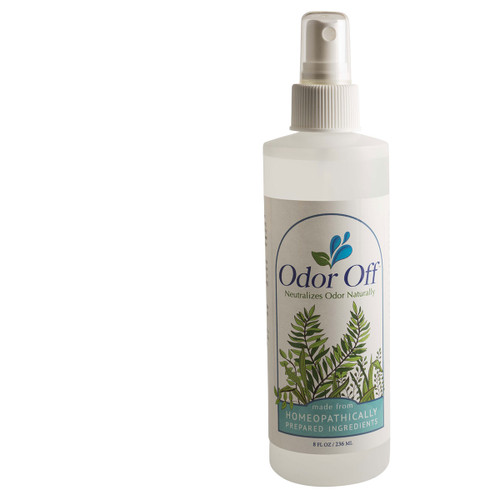 Odor Off  is recommended for bathrooms, cat litter boxes, garbage, and any type of smoke or biologically generated malodor. It works two ways: in the air and on odor generating materials. Odor Off does not mask the offending smell with another natural or synthetic fragrance. It quickly clears the air, leaving only fresh air behind.

Directions: Spray onto the surface and into the air. Wait a minute, repeat if needed.

The Odor Off  Story

The original version of Odor Off was developed by an ecological farmer to prevent the smell from manure in his barnyard, and the flies that smell attracts. Odor Off is the home version of that formula, prepared homeopathically from natural, plant-based ingredients. One of the first non-medicinal uses of homeopathy, Odor Off took 16 years to develop. It is safe for humans, pets, and the environment. Unscented formulation lasts for months.

"My rabbit shares my house with me, and uses his litter box faithfully - however, bunny urine is very potent and has a strong ammonia smell. When the heat is on in the house the smell from his litter-box can become quite over-powering, no matter how frequently it is changed. I have avoided using anything in his litter-box to help curb the smell because rabbits have a very sensitive respiratory system. I felt safe trying the Odor-Off because it is homeopathic and does not work by filling the air with strong aromatic oils or chemicals. I sprayed the urine and pellet area and waited about a minute, then gave it the 'sniff test'. I have to admit to being surprised....it no longer had any odor. Since that little experiment I have used Odor-Off consistently in his litter-box and the bathroom (which is a much nicer place now too!) Thank you for a remarkable, effective and safe product that doesn't do what all other products do, i.e. integrate another smell with a nasty one, and create an even worse one! With Odor-Off smells just disappear." -G.M.S

"This odor eliminator is exceptionally good! For those of us who wish to avoid scented air fresheners, Odor Off gives us the way to get rid of unwanted odors. Instead of masking them, this product just eliminates them. It knocks off odors with a (gentle) bang. I use it in my cat litter boxes to decrease odor in between cleanings - works like a charm. The litter boxes definitely stay fresher longer. I also have a large iguana whose cedar litter can get overwhelming at times. Odor Off takes care of that unwanted smell also -- not to mention its use in bathrooms also. Odor Off is remarkable, it works on odors in the air as well as on odor-producing materials."Jennifer L.

"My 12-year-old van was in an accident a few years ago and the back door leaked for a few months before it was finally fixed. The rug under the leak became full of mildew, and the smell filled the van when the back seat was up and exposed the rug. I had stopped using the back seat because of the smell. I used just a few sprays of Odor Off a month ago and the smell is gone - and the seat has been up and available for use ever since!" A.C.

Few things are as maddening as the itching blisters caused by Poison Ivy!  Be gone™ Poiso

WHP Be gone™ Fungus relieves burning and itching eruptions of the skin, as in ringworm or athl