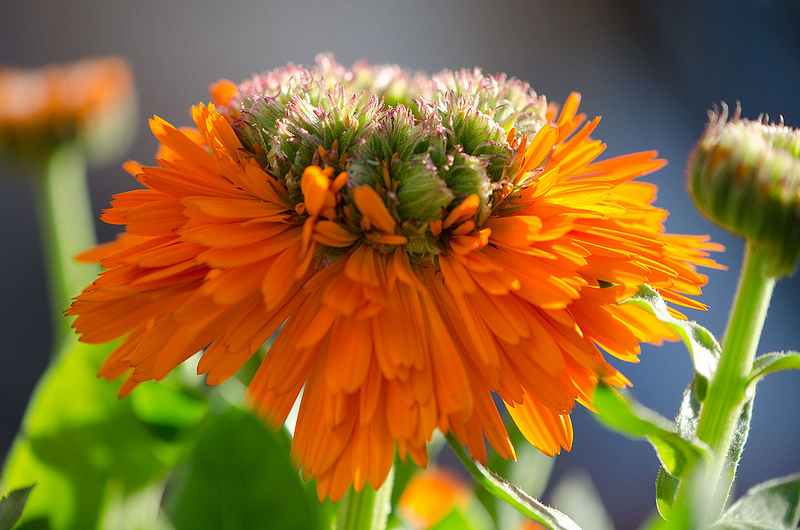 Anyone familiar with homeopathy has likely heard about the healing properties of the homeopathic remedy Calendula (also called marigold or pot marigold). Not only has it been used as a remedy in homeopathy for 200 years, but it’s also been used medicinally since the 12th century.

Calendula was first named by the ancient Romans, who observed the plant would bloom on the first day (Latin: kalends) of every month. They viewed the plant’s nonstop blooming as a symbol of joy and cultivated it in their gardens to spread happiness. It belongs to the same plant family as daisies, chrysanthemums, and ragweed. In homeopathy, the flower heads, including the petals, are used to make the remedy.

The species name, officinalis, refers to its historical use in apothecaries and pharmacopeias as the official medicinal species of the genus.

In June 1942, soon after the United States entered World War II, Dr. E. Petrie Hoyle (a very fine physician and homeopath) shared his own experience at the front in WWI in a paper entitled “Medical and Surgical Experiences in the First World War and Some Statistics and Medical Measures of Greatest Value to All Army Medical Corps.”[2]

He wrote, “I have some right to speak as I was actually ‘over there’ in Belgium and France for four full years, and fully employed every single day, much of the time being at or near the front. Our unit crossed to Ostend on September 4, 1914. I was the first American doctor actually at the front, at Antwerp, Malines and Furnes, dating from September 5.

“What I am recounting now is a slight gift, humbly offered and suggested to every M.D. of any school of medicine as a faithful and actual record of war life, time and pain-saving. As a tribute of thankfulness, I offer my old school friends our way of treating wounds and illnesses. … Nota bene—Every surgical case is, nolens volens, a medical case, at one and the same time!

“I beg all to make a test, and don’t worry too much about ‘lack of control cases.’ In war-time, especially, one cannot command ‘controls’ nor even get laboratory findings, to help one’s clinical work. One has to work, at top speed, on clinical knowledge, plus using the medicaments on hand.”

“We were so often under shell fire there that one hardly realized whether one was in this world or not. Anyway, there was a feeling that the next bomb or shell might not leave a trace of you, but as a matter of fact, work was done on the heartfelt supposition that the next bomb would fall in the next street or anywhere but just where you were working. The shriek of those shells is something very weird and fascinating, but we never worried as long as there were wounded to attend to, and we got so tired at night when we got to bed that there was nothing further but oblivion.”

During WWI, Dr. Hoyle made extensive use of Calendula solutions to clean wounds and in wet dressings. The results were uniformly good even though these solutions were quite diluted from lack of adequate supplies, as he reported: “My war experience brings to mind ex-President Coolidge’s dictum, ‘Make it do; do without,’ for requisitions get side-tracked or pigeon-holed, and that is one benefit of a homeopathic medicine case, which supply goes so far when we use drop doses, or with some drugs a teaspoonful of drug also goes far, making a pint of wet-dressing solution.”

He served the French, British and American troops during the four years of the war in seven different hospitals in Belgium and France, and, in 1915-1916, one year into his services, Dr. Hoyle was put in charge of the Hôpital Auxilliaire No. 50 in Rubelles, France. He witnessed there the gruesome state the wounded were in when they arrived from the front: “It has been one like handling the debris of train wreck, only rather worse!”

The kind of injuries that war surgeons commonly dealt with near the front in WWI were described in even more graphic detail by Miss E. Wilkinson, a nurse who had graduated from the Montreal Homoeopathic Hospital and had joined the St. John’s Ambulance Corps. While serving in Gallipoli during the fierce Dardanelles campaign, she wrote, “Most of the men are absolutely riddled by bomb explosions, shell and shrapnel. Bullets are quite common protruding from all parts of their anatomy from brain to toe. Legs broken, lungs crushed, brain and skull all smashed, bullets in the intestines, others going through about every place in their body.[3]

It is a remarkable fact that in those four years Dr. Hoyle did not see a single new case of tetanus or gangrene develop under homeopathic care despite the direst conditions of the soldiers with septic wounds: “I have used this [Calendula] on all sorts of wounds here, pouring it into compound fractures and using it on black wounds, as many men arrived here from the front with their wounds not dressed for four days, hence the torn flesh was in some instances black and offensive. … but to Calendula alone I attribute the quick sweetening of all these wounds.”

** Disclaimer: Please note that this story is a historical account of the uses of Calendula by a medical doctor in the early 1900s. While Calendula is a wonderful topical homeopathic application, WHP recommends its use solely for minor scrapes and cuts, cracked skin, sunburn, skin abrasions and diaper rash. Please consult a medical practitioner for more serious conditions.

Dr. Lisa Samet N.D. is an exceptional homeopath who provides Washington Homeopathic Products with a regular column on using homeopathy for the family. She's a naturopathic physician who specializes in homeopathic medicine and she's a partner with Dr. Andre Saine N.D. Dr. Samet graduated from the Southwest College of Naturopathic Medicine in 1998 and has been practicing in Montreal since then. She was born and raised in New York.

Dr. Samet has chosen to focus on homeopathy because in her experience it is the deepest healing modality available in that it does not just soothe or palliate symptoms but can actually stimulate the body to start to heal itself. Dr. Samet sees patients in her Montreal office as well as long distance using Skype. Learn more here: Dr. Lisa Samet. You can follow her on Facebook as well.

[2] E. Petrie Hoyle. "Medical and surgical experiences in the first World War and some statistics and sedical measures of greatest value to all army medical corps."Homoeopathic Recorder. 1942; 58: 57‐74, 109‐127.